Mini Desktop QuickLoadz is an AR app that places a model of a QuickLoadz trailer and a standard container on a surface using your phone or tablet’s camera. The user is given the exact same controls laid out as the real thing. The pieces of the trailer all move just how they would in real life, with sound effects to match.

I designed the app’s user interface and managed the small team of software developers implementing it. The development process for the initial version was split into six sprints. I conducted extensive bug testing and feedback to make sure the app represented QuickLoadz’s product as accurately as possible, made sure the team was implementing the requirements to the best of their ability, created the promotional material for it and published it on the App Store and Play Store.

This is a continuing project with outlined plans for future versions.

Win Freight is a long-form animation outlining many potential applications of the unique QuickLoadz product, both current and future.

The assets were drawn in Adobe Illustrator. Repetitive animations such as the QuickLoadz trailer loading and unloading a container, the container doors opening and the windmill blades spinning were done in Adobe Animate. These small animations were combined with the rest of the assets in Adobe Premiere. From the first draft of the script to the final revision of the animation, the project took about two months on and off. I tweaked the scripts, recorded and cut the audio, drew all the assets, animated the sequences and made about nine animation revisions before the final product was ready to publish. 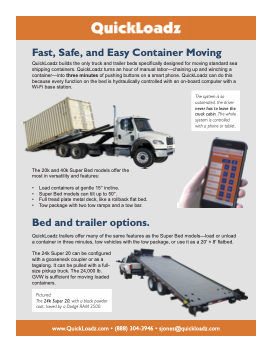 These promotional brochures are good examples of the visual identity of the brand that I developed. High-resolution cutout images of the products being used break up large portions of text. The banner along the top and bottom in QuickLoadz Orange are striking and memorable. Gill Sans is used throughout for its versatility. I shot and edited all of the product images included with Adobe Photoshop. The brochures were laid out in Adobe InDesign.

The Online Advisor was my senior capstone project. Our goal was to automate the work an advisor would do before meeting with a student to arrange their courses for the upcoming semester. This required four fundamental pieces that we split the work into. First, the software had to read a student’s course history, a DARS and import it. We needed to build a database of students, courses, grades, semesters and programs of study. The software had to perform operations on the database such as presenting a student with what courses they would have to take to complete all of their programs of study (majors, minors and certificates) in a linear fashion, using a fitment algorithm to arrange those courses into future semesters, predict how many students will be taking courses in the future, with an intuitive UI to present all of these features.

I handled the HTML front end. The database and most of the back end was implemented in Django, as it was easy to work with and provided many simple methods of pulling the information from the database into the web front end. I wrote the front end in pure CSS and HTML, as the controls and interface didn’t require anything too complicated and I wanted to keep the load time down. Most of the onscreen buttons are CSS stylized links. I borrowed a lot of my work there in creating the initial version of this website.

This project is a tech demo for a course in interactive graphics. It was coded in C++ as pure OpenGL with no libraries nor graphics engines like Unity or Unreal. The concept is simple: an ordinary park scene that, at the push of a button, becomes a rap music video. The sky turns dark, the camera switches from a telephoto lens to a fish-eye lens, randomly generated jump cuts and angles pulse to the beat of the music.

At first, the scene was a small park with manually placed trees, shrubs and two benches. After testing the rap mode, it didn’t seem dramatic enough. I made the scene 100x bigger and wrote a function that populated the park randomly with over 1,000 objects to fill the space out more. Adding sound was a technical hurdle—I didn’t want to dig into NSSound for such a small project. I found a simple command line tool, afplay, that plays MP3 files. I found that after the music started, I was unable to stop it and the graphics froze until it was completed. To work around this, I execute afplay in a separate thread (Yes, believe it or not, I found that adding multithreading was the simpler of two solutions) and removed the ability to exit Rap Mode before the song is over.

This was a semester-long project that slowly built on itself. We were provided with several large CSVs of data with DNA motifs. We were asked to calculate which motifs were most significant in stress-response experiments through a variety of methods throughout the semester as a way of introducing us to different data mining concepts. By the end, I had a Python program that analyzed the data using a greedy algorithm, a decision tree (of n=25) and a random forest with cross-fold validation to compare their accuracy.

When my brother and I started our rental business, the name came to us very quickly, but the logo and identity was less obvious. My early logo drafts were rejected for not including a house. I countered that we need to be distinct; a housing company with a roofline in the logo isn’t exactly original. We spitballed some ideas that would lean more into the ‘Neptune’ branding and he off-handedly (and perhaps jokingly) suggested, “What about an octopus holding a trident?”

An hour later, our logo was finalized.

I’ve been watching Apple Keynote events since 2010. It’s easy to see the patterns in the structure of their events—down to the minute idiosyncrasies of each presenter, like the exact way Tim Cook walks on stage and says “Good moooorning!”. As a way of poking fun at them for it, I made Apple Keynote Bingo sheets for a few events of theirs and posted them on the /r/Apple reddit forum. Some of them gained a lot of traction. I knew my silly joke reached its peak when it was directly acknowledged during a Keynote.

Inspired by a Numberphile video on the Greatest Ever Infographic, I became interested in creating a graphic that could combine as much information as possible into a single page. I began charting a topic familiar to me, variants of Tesla vehicles. On one two dimensional plane I used Google Sheets to chart seven distinct variables: configurability, months in production, battery size, model designation, powertrain, platform and Autopilot hardware. I later added a second sheet sorting the same data on the Y-axis by range instead of battery size and a third sheet showing 0–60 mph acceleration.